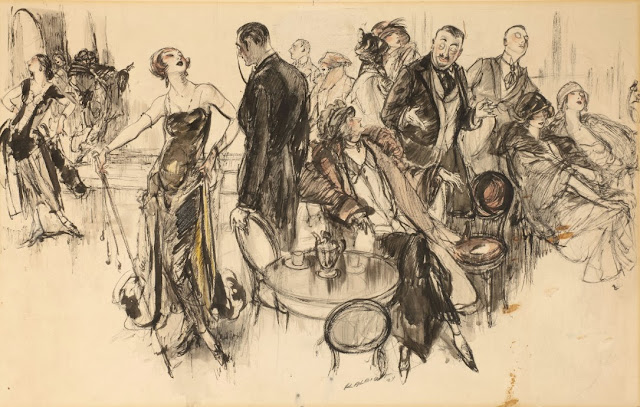 Henry Patrick Raleigh (1880-1944) was a successful, prolific illustrator in his heyday of the 1920s and early 30s, but committed suicide after illustration fashions changed and he failed to follow them. The image above is typical of the elegant lifestyle he portrayed in 1924. The latest issue (No. 43) of Illustration magazine features Raleigh in an article written by his grandson who is planning to sell his extensive collection of Raleigh's works (see announcement at his website). Other interesting information regarding Raleigh can be found here, here and here.

Even though Raleigh would leave his drawing board for months at a time to travel the world, he could create illustrations in a matter of a few hours in many cases: he claimed to have produced thousands. He also did not make extensive use of models, basing his work on his knowledge of human anatomy along with a good memory for visual details.

So it isn't surprising that he sometimes slipped up. I noticed a couple of cases in the Illustration article where women were shown at angles that in real life would have them toppling to the floor. (When standing erect, the center of a person's head should not be outside the zone covered by his feet.) I really like Raleigh's work, but it's still somehow comforting to know that it wasn't always perfect. 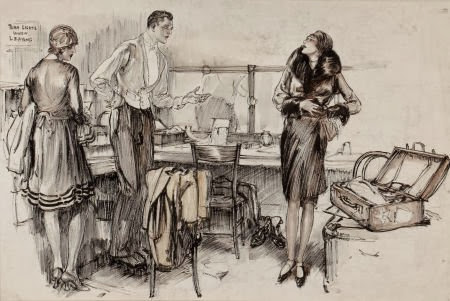 The most obvious instance is the lady at the right. 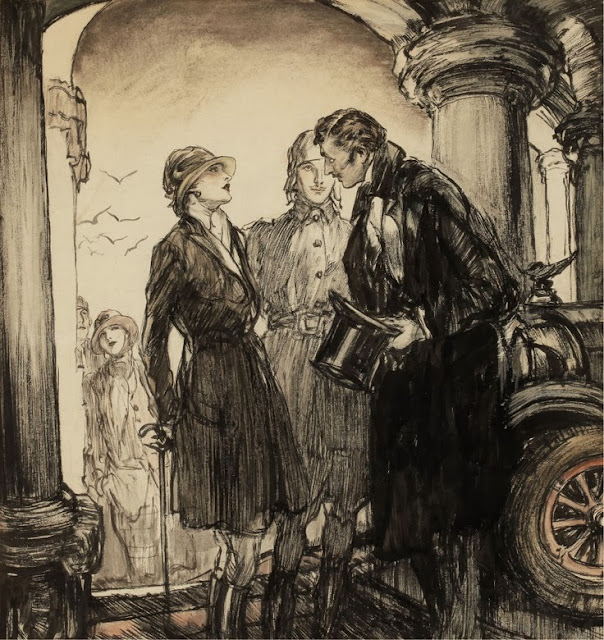 A borderline case here, but I vote that the gal in riding togs ought to be falling backwards. And the helmeted man in the center might fall to his left. 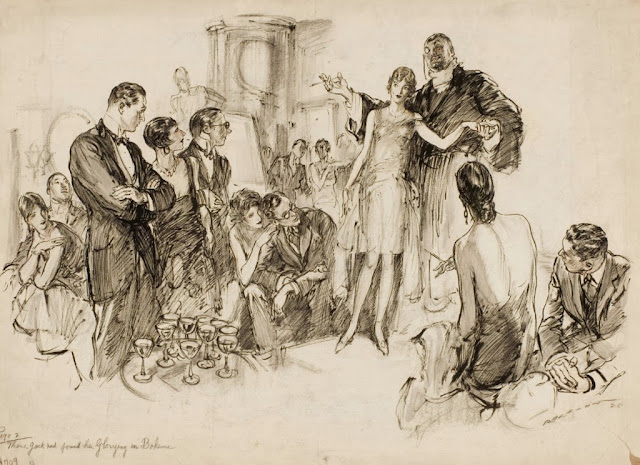 The girl in front of the large man is also in an unstable pose, since she doesn't seem to be leaning against him.  (One can argue, but I judge that she is standing slightly in front of him: note the position of her left arm relative to his chest and the way his body is turned.)

Was he making a decent living from his art? If he was, why did he suicide??? Poor man.

Hels -- As I mentioned, he failed to keep up with changes in illustration fashion.

To clarify and expand, nearly all successful illustrators had to change their style and sometimes even their preferred medium in order to stay in line with what art directors and presumably the public expected.

For example, Mead Schaeffer and Dean Cornwell went from painterly in the 1920s to tightly rendered style by the 1940s. And the preferred medium went from oil paint in the 20s to watercolor by the late 30s.

Illustrators who stuck to what made them famous were eventually seen as being old-fashioned, and they lost clients. In a number of cases, careers were ruined, Raleigh's being one of them.