Large ferryboats carrying cars and passengers on comparatively long overnight runs are common in the Mediterranean and Baltic sea areas in Europe and in parts of Asia, though not in North America where most ferries simply cross rivers, narrow straits and harbors.

A few years ago I took one such ferry from Palermo in Sicily to Naples. It had a small, but adequate cabin and public areas to visit when not in the cabin. Being an overnight trip, no serious sightseeing or business time was lost. Very convenient.

I recently was on a cruise that covered, among other things, the Tyrrhenian Sea part of the Mediterranean (it's bounded by Italy, Sicily, Sardinia and Corsica).

From the cruise ship in several ports I saw that ferries of the Tirrenia line are being repainted using supergraphic images of American superhero comic book and movie cartoon figures.

A Tirrenia ferry not yet repainted, seen at Naples. 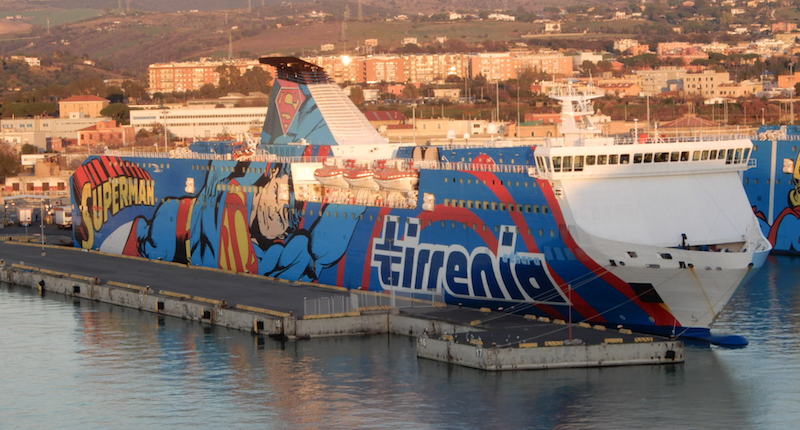 Next, Supergirl. An image of Superman's face is masked by the bow of the other ferry.

At Cagliari I saw Sylvester and Tweety.
Other ferries carry images of Batman and Wonder Woman.
Posted by Donald Pittenger at 1:00 AM