Well, "archetypes" might be putting it a bit strongly, but blog titles do require brevity. Here are two buildings, one characteristic of the 1930s, the other an example of a 1950s-60s fad.

I took the above photo in January of this year while visiting Reno, Nevada. The white building to the left is the former downtown Reno post office, built in the early 1930s and currently being renovated (background links are here -- does not mention the closing -- and here). On the right is the Pioneer Center for the Performing Arts. Its roof is a geodesic dome, but in plan view it's a pentagon whose sides bulge out as if inflated.

Some people consider the post office building an example of Art Deco style. While it does feature some Art Deco decoration, I'm inclined to place it in the category of abstracted, stripped-down classical architecture often seen in government and other buildings of the 1930s in Germany, Italy, and the United States as well as elsewhere. Visually, such buildings aren't as entertaining as those of High Art Deco style, but I find them better than the designs that appeared after World War 2.

Now let's consider the juxtaposition shown above. In downtown areas of relatively unplanned American cities, you usually can see a jumble of architectural styles including interesting contrasts such as in Reno. This can be good or bad, depending on the styles. Jumbles can satisfy libertarian philosophy or might well appear as an ugly mess. Uniformity can be totalitarian (to introduce another political metaphor) or a means of protection against something stylistically worse. Below are some examples of uniformity. 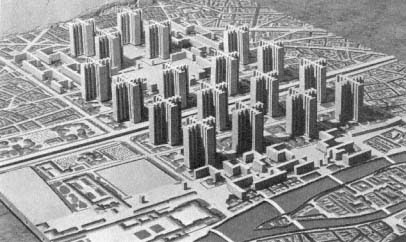 Modernist architect Le Corbusier came up with a massive urban renewal scheme for Paris known as Plan Voisin. A 1925 model is shown here. At the lower right is the River Seine and the Ile de la Cité, which provides orientation. Corbu's plan would have taken out a large swath of streets and structures north of the river and replaced that with a uniform set of high-rise structures. Lower buildings would be placed close to the Seine. At the lower left of the image we see that arcaded rue de Rivoli structures across the street from the Louvre would also have modernist replacements. To me, this would have been capital-T Totalitarian.

And what about the geodesic dome, an object of much praise in certain quarters. For the most part, they are simply scattered here and there. But there is at least one concentration of them, something in Cornwall, England called The Eden Project, shown above. For what it's worth, I consider it ghastly.

Here is a contrasting, traditional small community, the town of Ivoire on the French bank of Lake Geneva. Its buildings are not a uniform design, but share a similar range of building materials and spirit. Très charmant, say I.

"government and other buildings of the 1930s in Germany, Italy, and the United States as well as elsewhere": would it be too, too cruel to call the style "fascistic"?

Milan railway station has something of that about it, tho' its architectural history seems a bit intricate.
http://en.wikipedia.org/wiki/Milano_Centrale_railway_station