The distinction between historical art and political art can be fuzzy. Whether a painting or illustration falls into one category or the other is often a subjective judgment. One might think that a painting of some event from Greek or Roman times would be a history painting pure and simple. But even there, if the painting depicts one side of a conflict in a more favorable light than the other side, then a political statement of sorts is involved. This probably doesn't matter much if the subject is not related to politics or ideology at the time the painting was created. However, I'll contend (until I change my mind) that if an artist paints a scene from history in such a way that commentary is made about current (for the artist) events, then this is political art. And artistic commentaries on events or people contemporary to the artist are indeed examples of political art.

The present post deals with the era of the Russian revolution of 1917 and two artists who dealt with it.

First is Isaak Brodsky (1883-1939), mentored by the great Ilya Repin in pre-revolutionary times, who became and advocate for, and practitioner of, Socialist Realism in the USSR under Stalin's regime. His Wikipedia entry is here. Brodsky's public painting after the revolution was was largely political.

Morton Roberts (1927-1964) was a fine illustrator and painter who died far too soon. David Apatoff wrote about him here, Leif Peng presented some images here, and a biographic sketch is here. If you can find a copy, issue 22 of Illustration Magazine (Spring, 2008) has an article about Roberts. Otherwise, you can click here, and flip through that issue on-line.

Roberts illustrated Life Magazine articles on the Russian Revolution that appeared during 1959. Although the Cold War was going strong then, Roberts' illustrations strike me as being far more historical documentation than political commentary. But judge for yourself.

Brodksy: Demonstration - 1930
I don't know if Brodsky was depicting a pre- or post-revolution rally here. It seems he wasn't afraid to paint crowd scenes.

Brodsky: Lenin at a Rally of Workers - 1929
Another crowd scene. Again I don't know the date of the occasion being depicted. It, and the scene in the first image, might even have been inventions by Brodsky, showing typical events of 1917-23.

Brodsky: Mikhail Frunze - 1929
A portrait of a revolutionary figure who met a controversial end. Click here for biographical information on Frunze.

Brodsky: The Execution of the Twenty-Six Baku Commissars - 1929
This took place during the civil war between the Reds and the Whites. 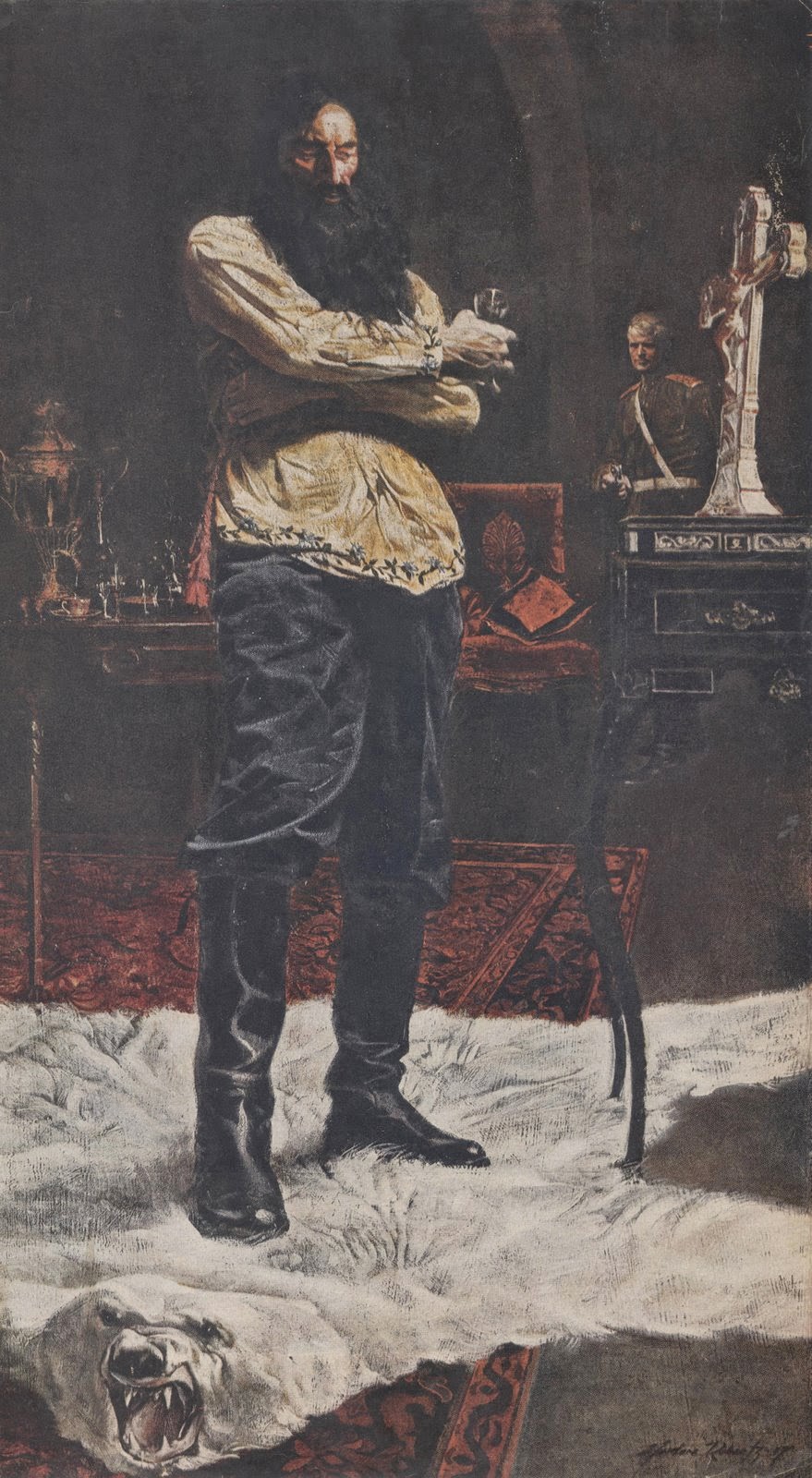 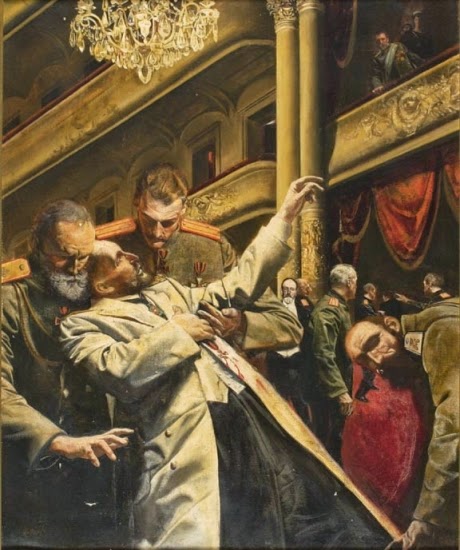 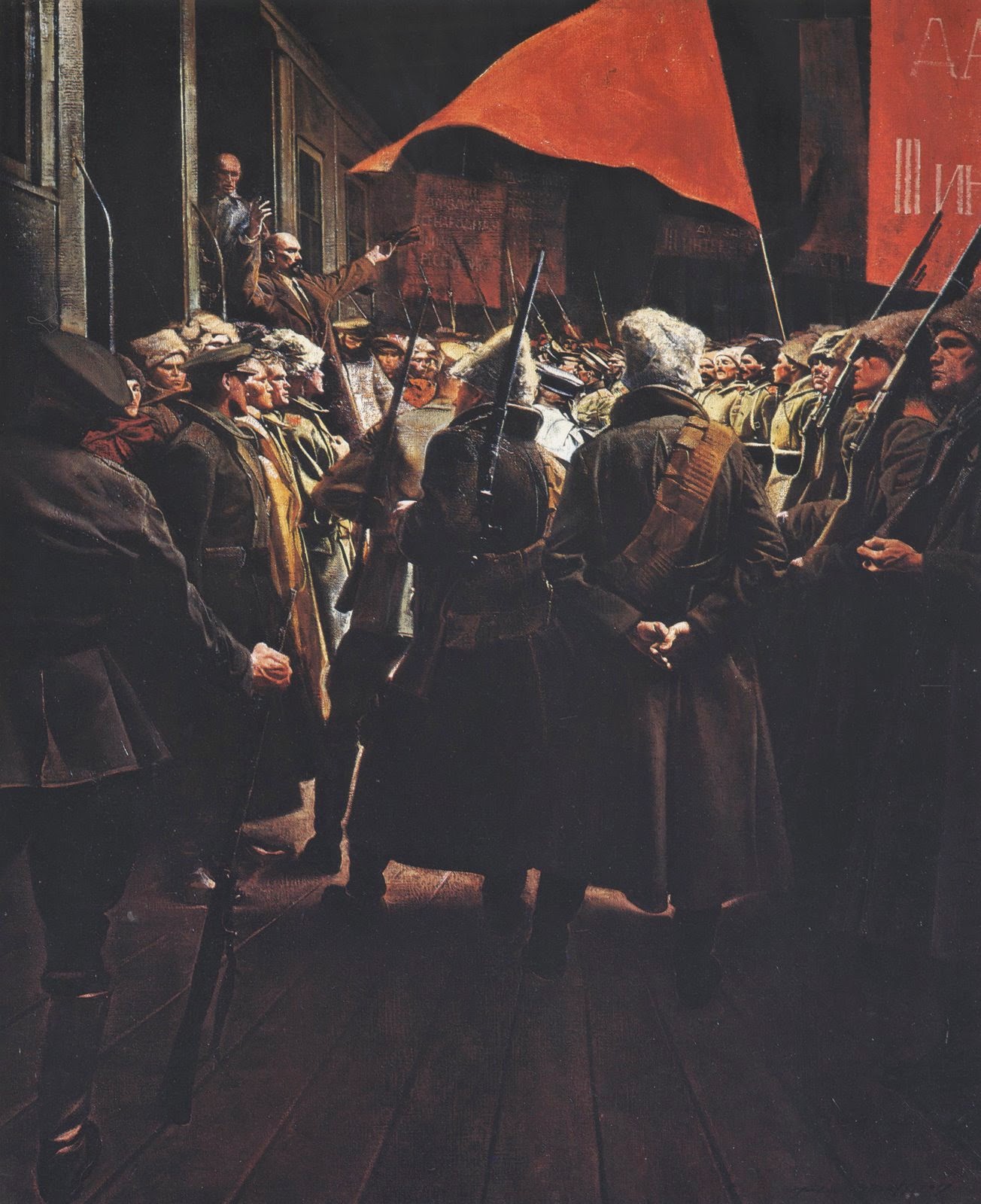 Lenin Addressing Troops - 1959
This might be Lenin's famous arrival at the Finland Station in Petrograd.