I've been busy of late, and apologize for not replying to comments. For one thing, I've been traveling a lot this winter season, my wife wanting to get away from gloomy Seattle.

Also, I was writing another book. 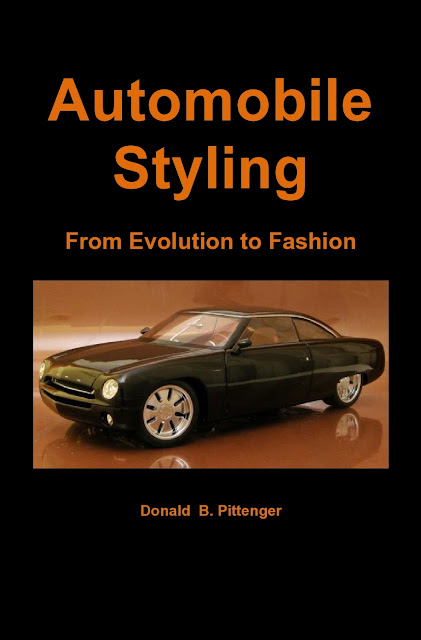 That's the cover, and it's an e-book that can be found here. It can be downloaded to an iPad, Kindles, and perhaps other devices.

My thesis is that after a period of rapid, focused change in appearance during the 1930s and 40s, what followed has been largely a case of changing styles or fashions that were influenced to some degree by outside forces such as technological changes and government regulations.

Here is an excerpt:


* * * * *
Harley Earl’s legendary design taste seems to have failed him in his last few years as GM styling supremo.

The tepid public response to GM’s 1957 senior line resulted in a set of garish, panic-induced 1958 facelifts that a younger Earl likely would not have tolerated. My belief is that Earl’s success from the end of the 1920s to the mid-1950s was based on his ability to formulate a valid concept of styling evolution.

As noted, he strove to have cars seem long and low even if they physically were not. Indeed, automobiles did become longer and lower during his reign. He probably saw that car bodies would become integrated with passing attention given to aerodynamic streamlining and greater emphasis on visual streamlining. This too came to pass. Towards the end of the 1940s he must have considered jet planes and rocket ships as perhaps the next evolutionary direction, and for a time this seemed to work as well. And his judgment regarding styling trends might have remained acute enough that, by the mid-1950s, he perhaps realized that airplane and spaceship themes were not going to work well because they were impractical in terms of street and highway based everyday use. If this was his thought, he was correct yet again.

Earl’s real problem by 1956 or thereabouts was that he could not think of any valid new evolutionary styling path. And he could not do so because no such path existed. So he floundered, not being able to deal with a directionless styling environment.

* * * * *
Unlike my other e-book "Art Adrift," this book is richly illustrated because I was able to make use of advertising and other publicity material issued by the automobile companies.

I hope the car buff readers will enjoy it.
Posted by Donald Pittenger at 1:00 AM

Will you be attending the Amelia Island Concours?

Every now and then there are rallies near us, where ancient vehicles pootle around the countryside for us to enjoy. What has taken my eye are the small lorries and delivery vans - there's something beguiling about them.

Anonymous -- No, I'll be in central and southern Florida during the next couple of weeks, but when the Amelia Concours runs, I'll be in southern California while my wife is watching Indian Wells tennis there.

I sometimes get to the Pebble Beach Concours, but that is getting very expensive, so I usually take a pass on it.

dearieme -- A delivery van rally! What a concept!

After that, who'd want to watch Morgans and Frazer Nashes climbing sodden hillsides.