Frank Tinsley (1899-1965) was an illustrator who specialized in machines. Aircraft, usually, but also ships, trains, cars, space ships and any other speculative technology that pulp and semi-pulp magazine editors tossed his way. By the 1950s he was often called upon to write the articles that he was illustrating. So he had a nice little niche and filled it well.

Here is biographical information, and links with plenty of examples of his work are here and here.

Tinsley worked in color when doing magazine covers, but much of his article illustrations were two-color, the norm for the likes of Mechanix Illustrated, where he did a good deal of illustration following World War 2.

During the 1930s his drawing wasn't always accurate, but he improved somewhat as time went on. Apparently his editors and fans weren't troubled. 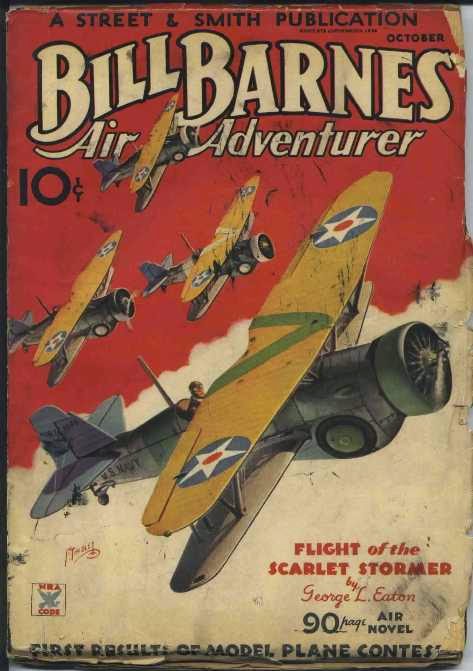 Bill Barnes magazine cover - October 1934 or 1935
This seems to be a Curtiss BF2C or something like it. The fuselage is too large, too long, if we use the pilot as a scale reference. The upper and lower wings are out of perspective, seeming too close together. 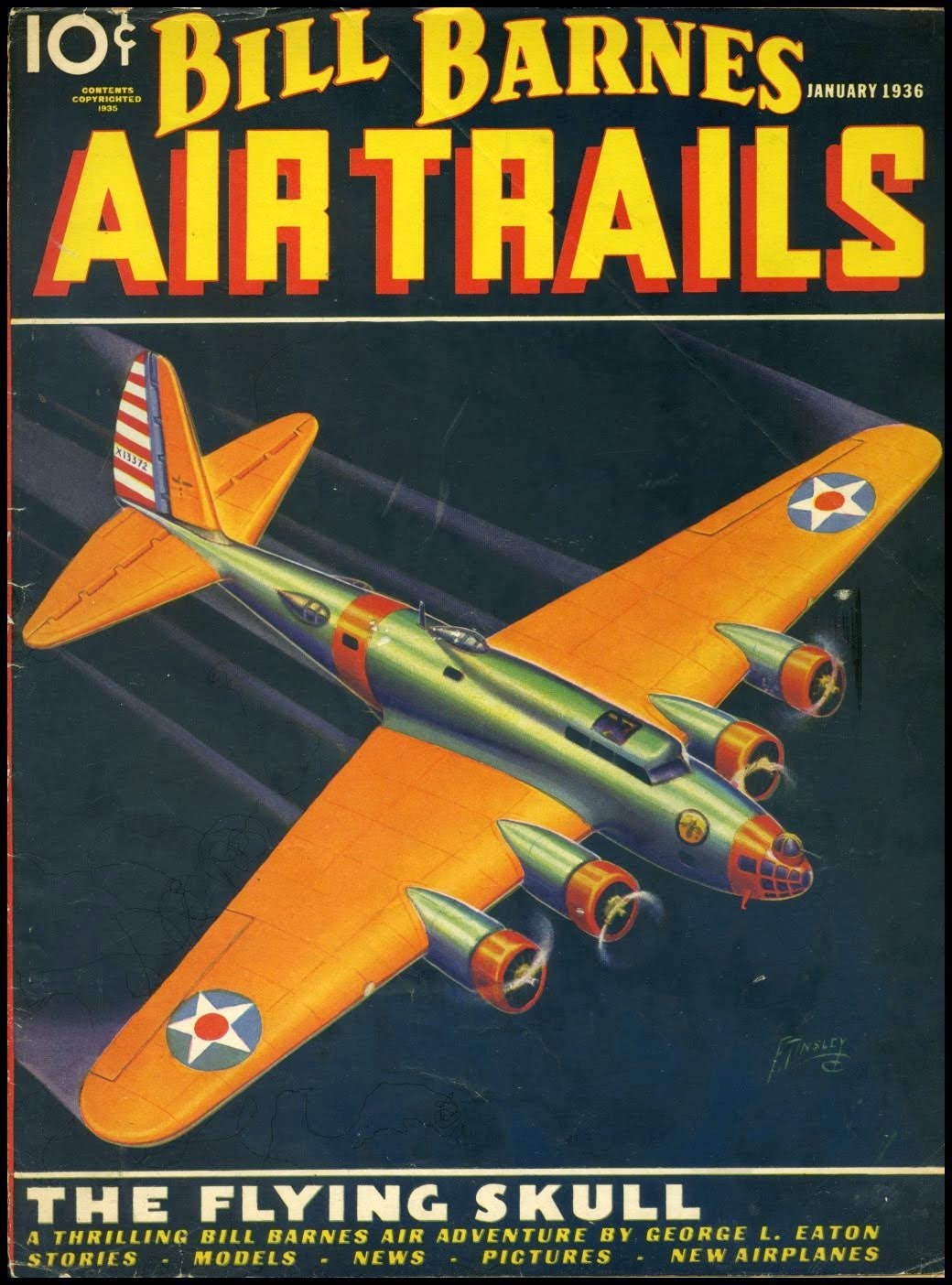 Bill Barnes magazine cover - January 1936
Shown here is the Boeing model 299, or XB-17 Flying Fortress that first flew in 1935. Although Tinsley got the various parts in roughly the correct shapes, they are out of scale. The perspective is off -- the axes of the wings and horizontal stabilizers on the tail diverge with distance, whereas the opposite would be correct. Also, the 299 was never painted, nor were other 1930s B-17s, yet Tinsley gave it current Army Air Corps colors (sort of -- the green is wrong and the orange should be more yellow). 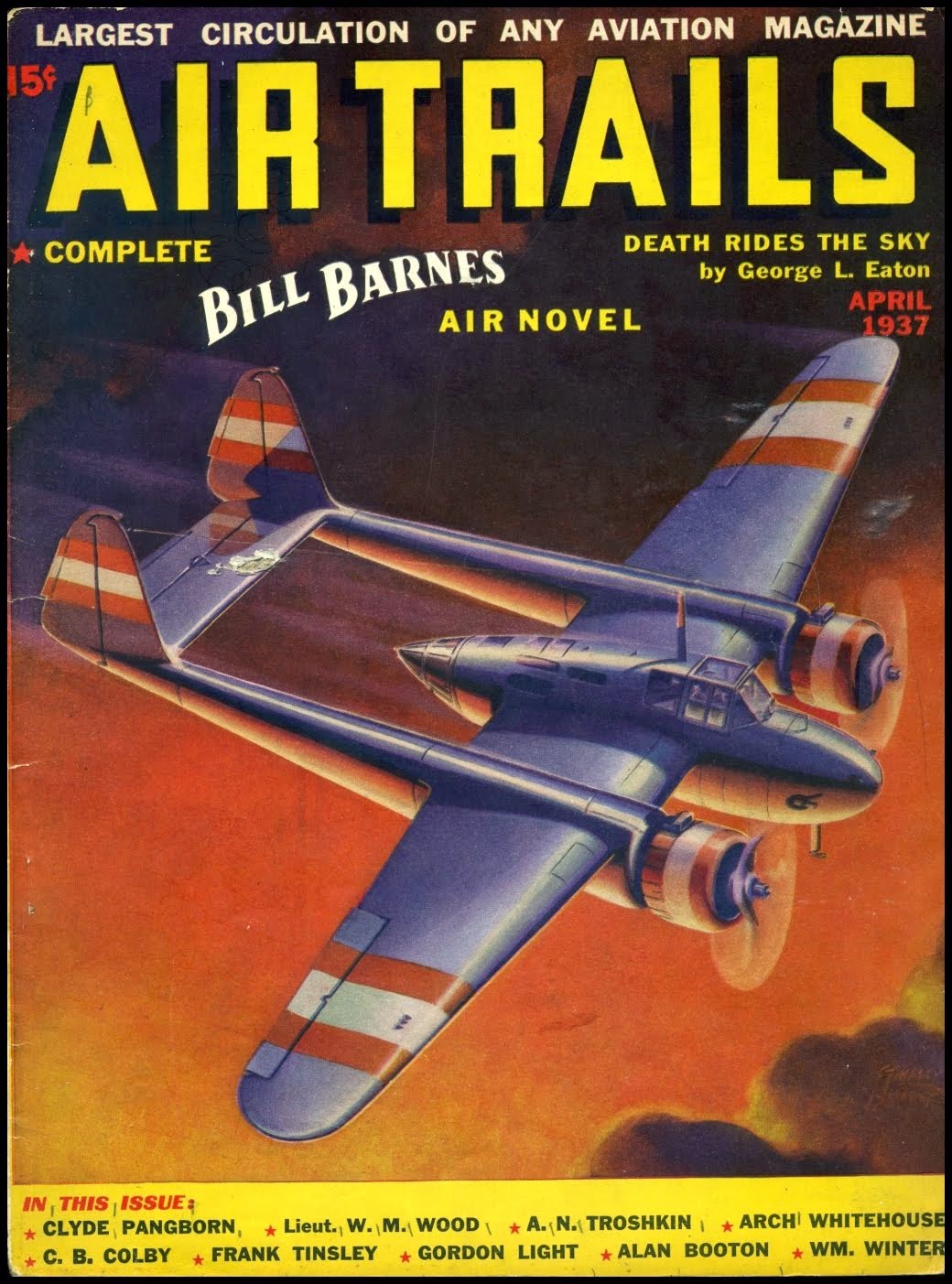 Air Trails magazine cover - April 1937
This is a Fokker G I two-place fighter that flew for the first time in March of 1937, about the time the magazine hit the news stands. Therefore, Tinsley must have been working from other drawings and perhaps photos of the plane on the ground. As usual, details are wrong. For instance, the unit housing the pilot and gunner is too small relative to the rest of the aircraft. Further, for some reason the plane doesn't carry actual Dutch insignia. 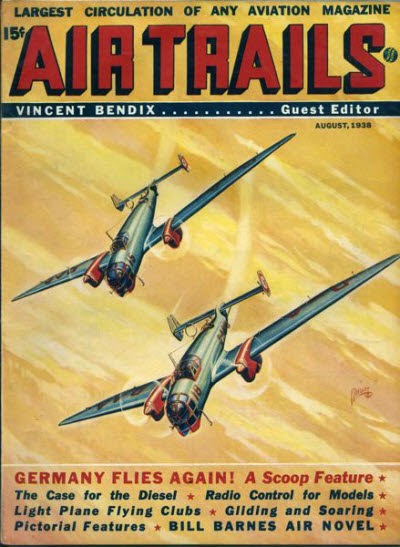 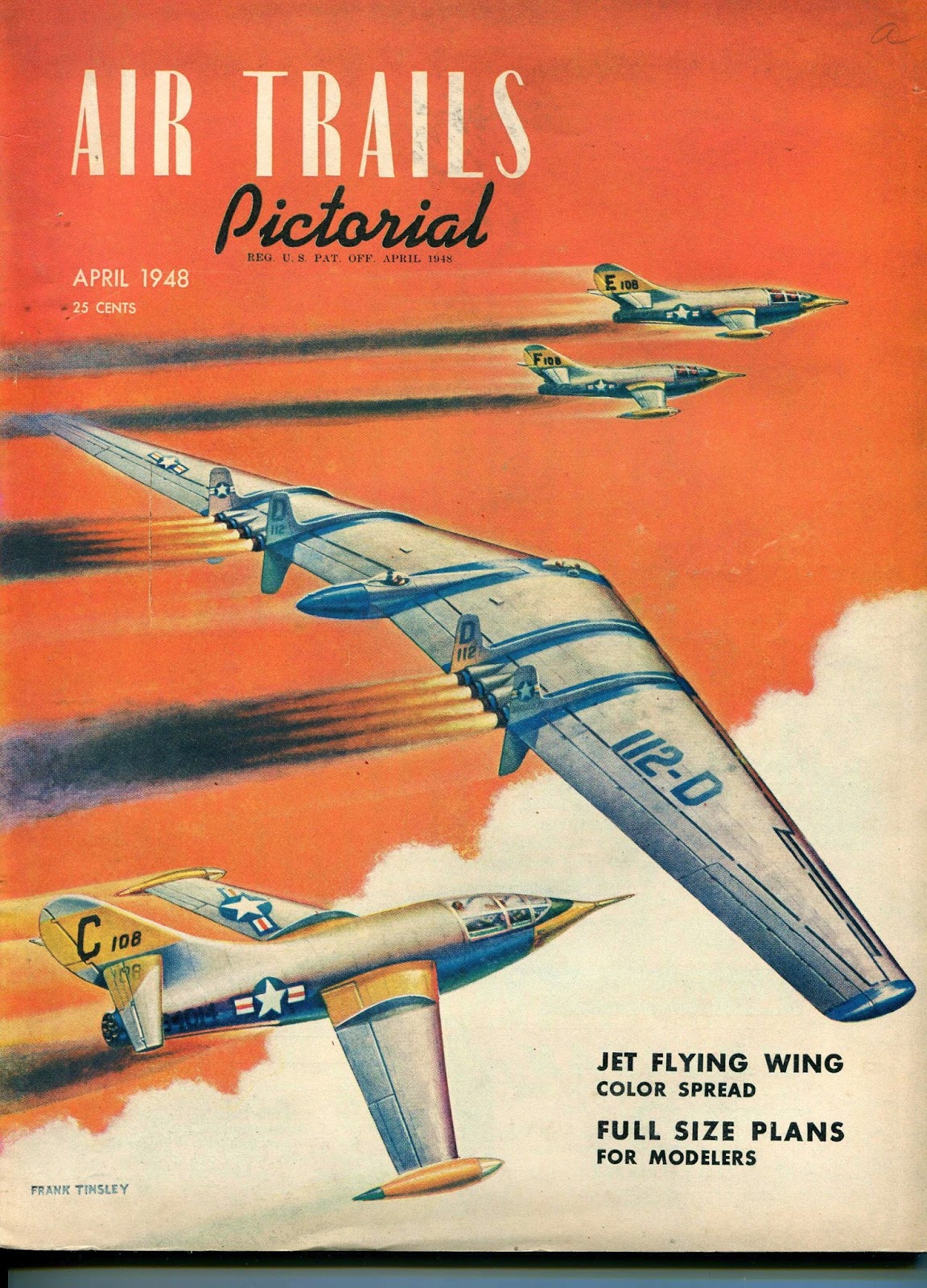 Air Trails magazine cover - April 1948
That's a Northrop YB-49 flying wing bomber. I'm not sure why rocket-like flames are spewing out behind its jet engines. The escort fighters are purely Tinsley's imagination. Their fuselages resemble that of the Bell XS-1 that broke the sound barrier the previous October. The wings and tail are swept back, unlike the XS-1. On the other hand, Tinsley's fighters seem to have rocket motors like the XS-1, but are shut off, a jet engine being in use. Yet I don't notice any air intake for a jet engine. Oh well.... 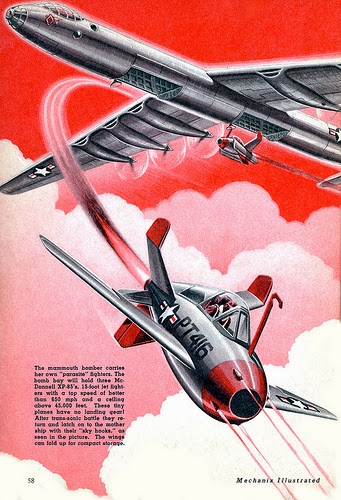 Mechanix Illustrated magazine illustration - 1948
Here we see what the McDonnell XP-85 (later XF-85) Goblin "parasite fighter" might have looked like had it entered service. The B-36 bomber shown in the image supposedly had a 10,000 mile range, far in excess of any potential escort fighter, so one idea was to have them carry tiny escort fighters for deployment as necessary. Two prototypes were actually built and a few test drops were made from a specially modified B-29, but the project was cancelled due to its impracticality. As usual, Tinsley's drawing is off: the XF-85 fuselage was actually shorter and chunkier, and the tail units were closer together. The B-36 is poorly drawn as well, the wings seemingly drooping and the cockpit glazing pulled too far around the side of the aircraft. 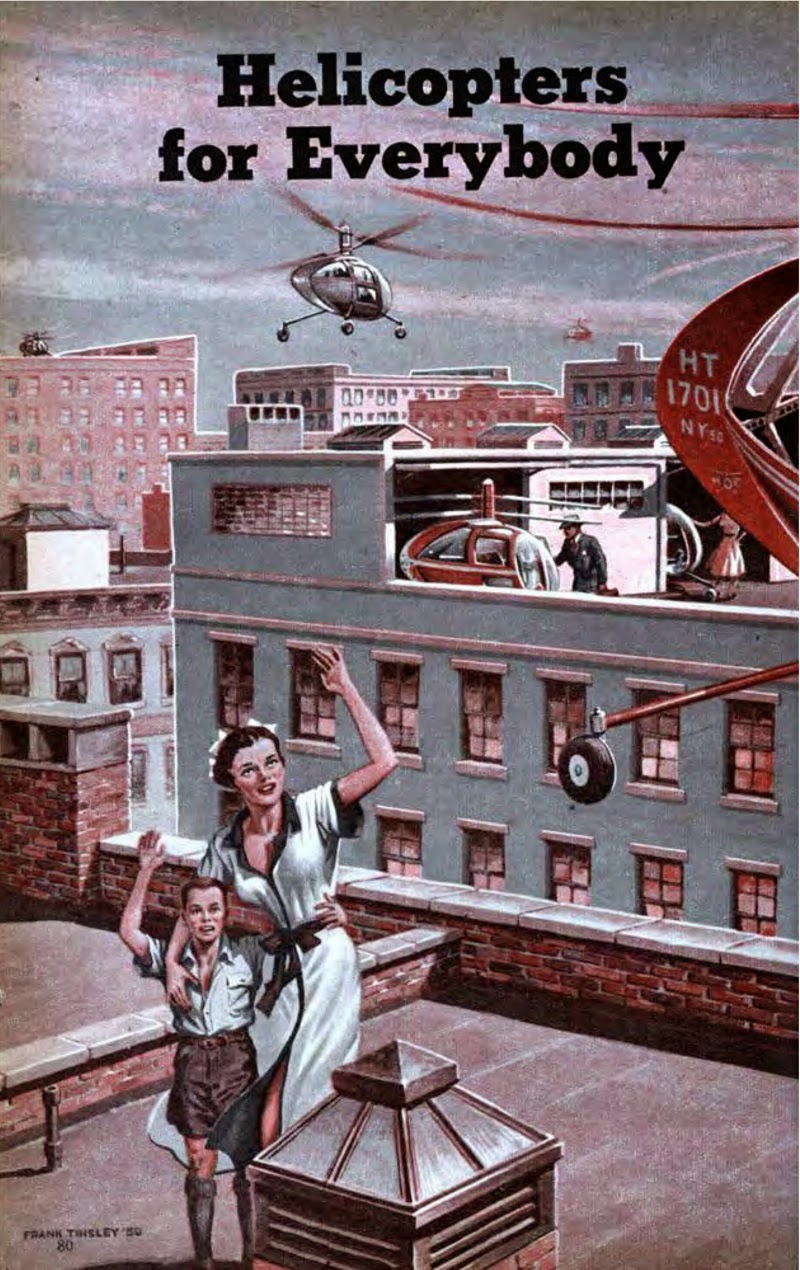 Magazine illustration - 1950
This is the left-hand part of a two-page spread. The helicopters are conjectural, so I can't criticize how they are drawn. I include this because it embodies the "gee-whiz" sort of speculative future technology that Popular Mechanics, Popular Science, Mechanix Illustrated and perhaps other magazines featured for many years. The idea of ordinary people replacing their automobiles with personal helicopters is clearly insane for a number of good reasons, including what would happen in inevitable collisions and engine/rotor failures. 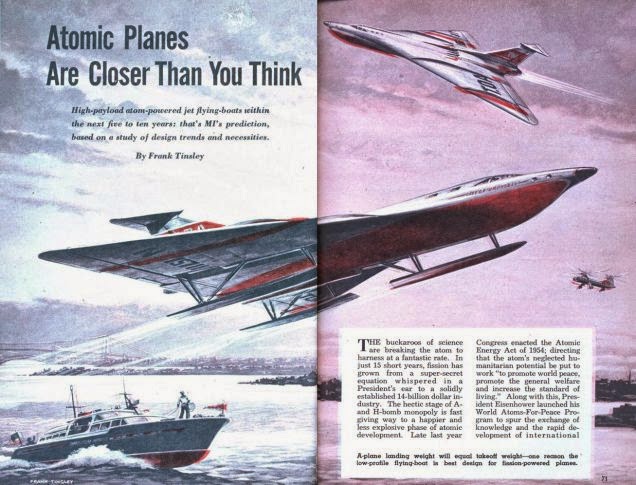 Mechanix Illustrated magazine illustration - August 1955
The U.S. Air Force funded development of an atomic reactor powered bomber, but the project was cancelled for reasons of practicality. Here Tinsley (who wrote the article) came up with a speculative design of a delta-wing flying boat bomber that used hydro-skis like those on the Navy's XF2Y Sea Dart fighter that first flew in 1953, but never saw service. 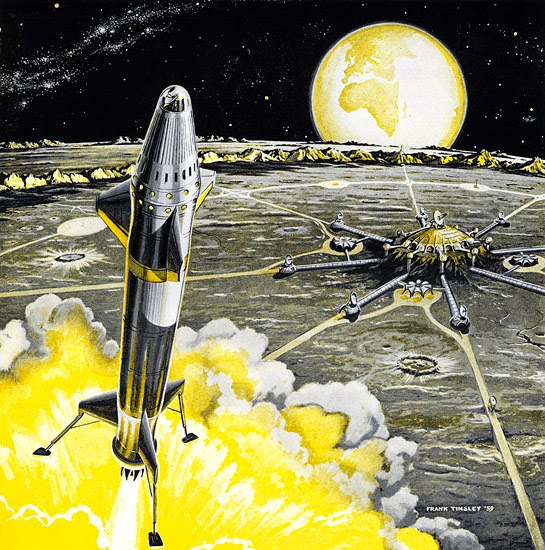 Moon base illustration - 1959
Finally, an atomic-powered rocket ship seen blasting off (or landing, maybe), and a base on the moon.

Donald,
After following this blog for a while I don't see that you have done much more than post a lot of work you seem indifferent about. You have selected mostly mediocre representational work and either said nothing about it or criticized it.
Why do you post such things? There is certainly enough past and present representational work of excellence which you could present.
If you look as diligently for the excellent as you do for the mediocre and the indifferent, you'll find it.
If you think modernism should be put in its proper diminished place how is posting mostly indifferent representational art going to help?
Joaquin Hermon

Even for non-modernist painting and illustration since the mid-1800s (my preferred time frame), there is a limited number of outstanding works. And there is my policy of posting three times a week on this blog and twice a week on my car styling blog: that comes to around 260 posts per year to assemble, 156 or so for ArtContrarian.

This means I chew through a lot of material over a period of years, and not all of it can be outstanding. So I suppose that, in practice, I'm often simply showing the diversity of non-modernist art & illustration that was going on under the modernist radar. If I had focused on what I consider to be the really good stuff, I would have run out of material a long time ago.

Finally, even though I try to educate readers regarding art history, I write this blog to entertain myself, supposing that a few others might also be amused. I did the same while writing at 2Blowhards, and that seemed to work okay.

I've noticed you don't get many comments. For what it's worth, I've been reading you for years and always find something interesting to chew on.