Norman Wilkinson (1878-1971) was a master poster artist (I wrote about that aspect of his career here). He also carved out noteworthy careers in other fields of art, especially painting marine and naval scenes. His Wikipedia entry is here and another link sketching his work is here.

Below are examples mostly of his marine and naval paintings. Unless he was commissioned to feature a particular ship, his sea paintings featured a lot of water and sky, whereas ships, land and other objects usually occupied small amounts of art canvas real estate. That seems sensible, given the visual vastness of oceans and seas -- something Wilkinson was intimately familiar with, having served in the Royal Navy. 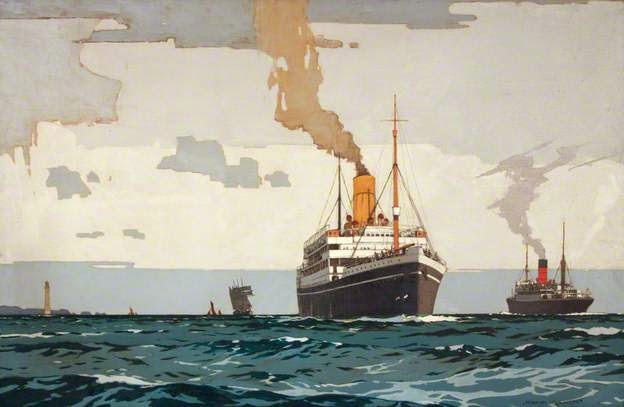 Scene with ships
This exhibits a poster style, but I don't know if it was actually used for a poster. 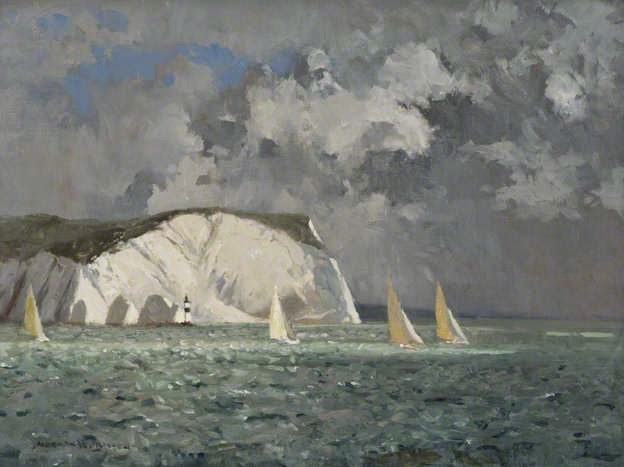 Yachts off the Needles, Isle of Wight
A contrasting, more painterly style. 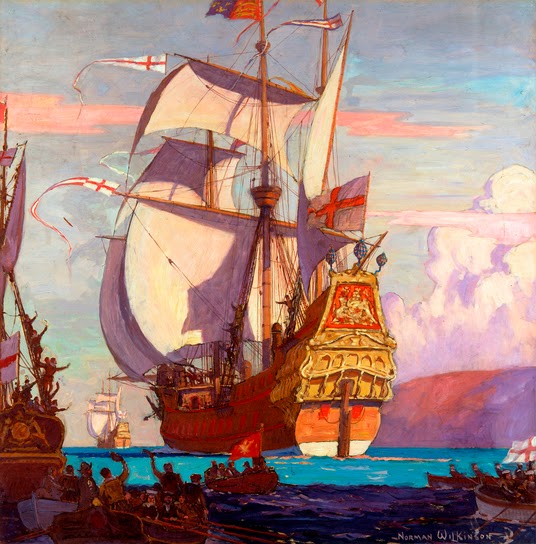 The 'Revenge' Leaving Plymouth to Meet the Armada - 1912
This is an illustration. 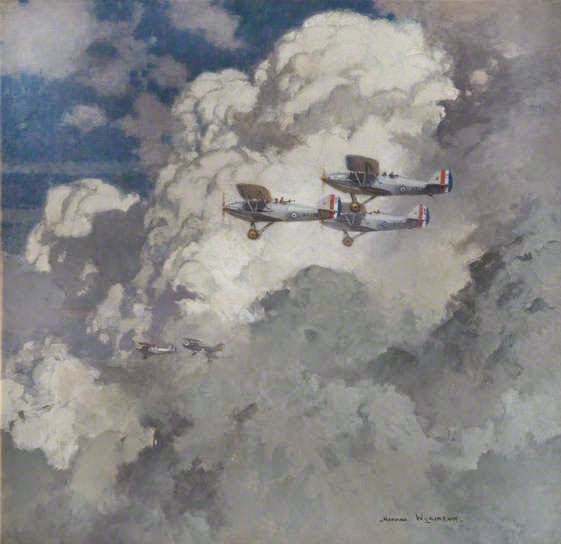 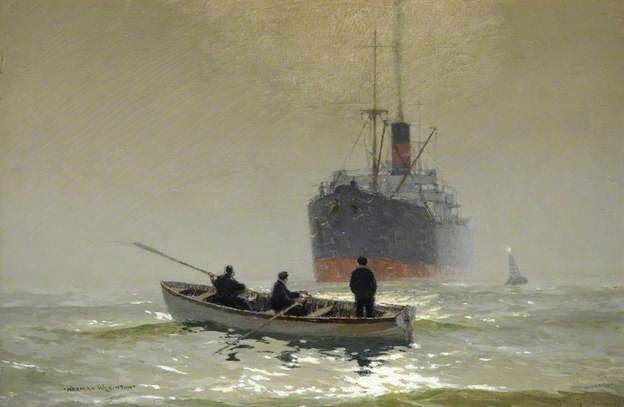 The Pilot
Nowadays, pilot boats are usually a lot bigger and fancier than this. 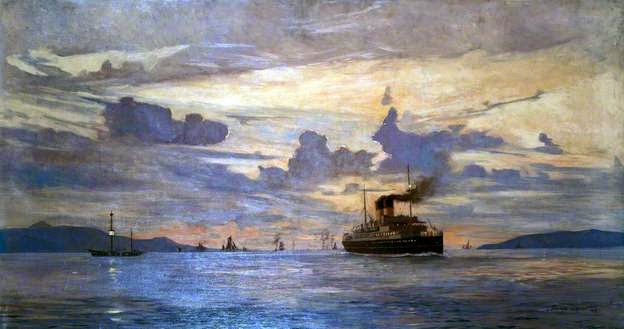 Dublin and Holyhead - 1905
This is a poster illustration for the London and North Western Railway. I include it here because the style is closer to his marine paintings than the style he usually used for posters. 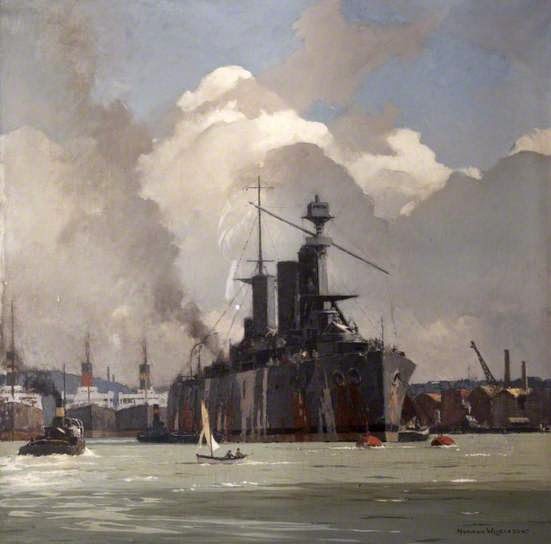 HMS 'Lion' Battlecruiser
This has a poster-like style.  Lion was Admiral Beatty's flagship at Dogger Bank and Jutland.  I'm guessing that this painting shows Lion on the way to her 1924 scrapping. 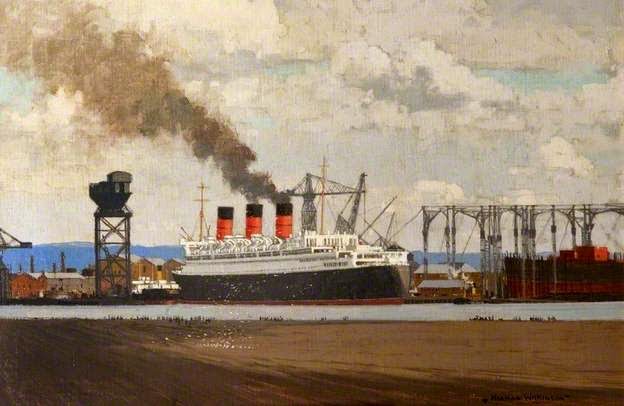 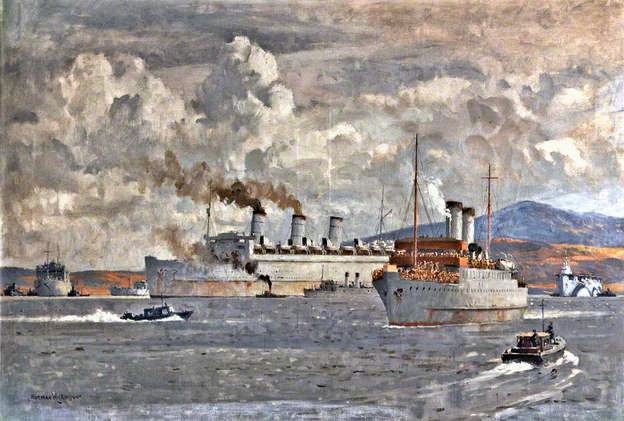 HM Troopship 'Queen Mary' at Anchor in the Second World War
Thanks to her high speed, the Queen Mary was in little danger of being torpedoed by a German submarine.  Her companion Queen Elizabeth went straight to troopship duties before ever carrying commercial passengers. 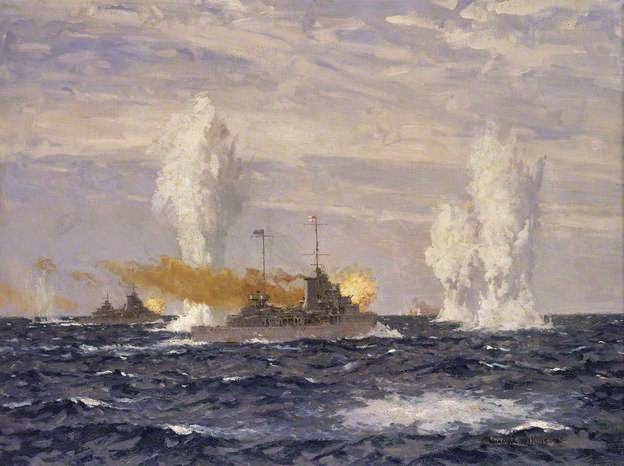 Action off the River Plate, 13 December 1939, Pursuit of the 'Graf Spee'
The commerce-raider Graff Spee was a heavily armed large cruiser (and not really a "pocket battleship," as she was called at the time).  She was finally hunted down by three British cruisers and damaged to the point where her captain had her scuttled. 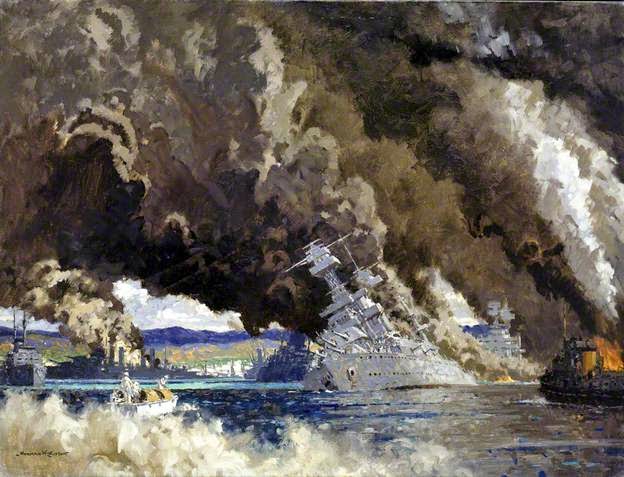 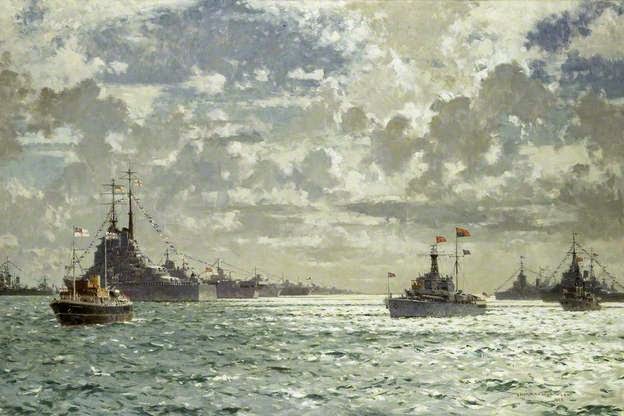 Coronation Review, 15 June 1953
I'm sorry to say that the next coronation review probably won't be as impressive as this one was.
Posted by Donald Pittenger at 1:00 AM

Happy holidays to you!

Fitting Out RMS Queen Mary at Clydebank (1936) is impressively detailed and historically important, but the two I actually prefer are The Pilot and the very atmospheric Isle of Wight.